Here are Vivien Leigh and Laurence Olivier in 1948 during a visit to Australia posing as a happily married couple! Well, as most marriages will, they had their ups and downs and in fact, Vivien's natal chart denotes a moody light-vs-dark kind of gal with emotional depression issues especially after she suffered a tragic miscarriage due to a fall while filming Cleopatra (1944).

Yet when she was feeling up she sparkled and her Sun Scorpio-Moon Aquarius personality blend denotes a very magnetic personality. Plus, as you see in her horoscope (below), sexy Sappho is in charismatic Aquarius (1:11) at Midheaven (MC, the Career Point @00AQ52) near genius Uranus (in its own quirky sign!) and her feminine Moon (goddess Luna!) there as well. Asteroid Vesta (The Vestal Virgin who keeps the hearth burning--kind of like Scarlett did for Oh Ashley!) conjoins natal Moon and her Part of Fortune (17AQ21) is there in 10th house as well. No wonder the young beauty Vivien (nee, Vivian) was noticed and put in moving pictures! And wonder why she makes a cameo appearance in our Neptunian tribute to Hedy Lamar?

Cupid's arrow found its mark when Vivien's good reviews for The Mask of Virtue in 1935 (London's West End) gave her confidence to introduce herself to another West End thespian, Laurence Olivier, after which they collaborated in films and in romance. Later in life, Vivien contracted tuberculosis and was also diagnosed as manic-depressive but this tribute is meant to concern her better days yet a word or two must be said.

In her chart powerful gold-hoarder Pluto is at one of the four Cardinal Points of Fame and Recognition (00Cancer) suggests that her worldwide fame could have factored in to her troubles in some way, perhaps through a lack of privacy (she became more isolated later in life). And both

Please enlarge for a closer look at the natal horoscope of the very beautiful British actress Vivien Leigh, nee, Vivian Mary Hartley, born November 5, 1913 at 5:16 pm LST Darjeeling, India; Hour of the Sun; an unaspected Pluto (unattached from her other planets), and Mercury out-of-bounds of the earthly plane with the conditions of both planets suggesting themes of a lack of connection with one's sense of power, and mental isolation. Note that 'Mary' is also a goddess reference and her family was Roman Catholic, a church that venerates and idolizes Mary via statues and graven images. 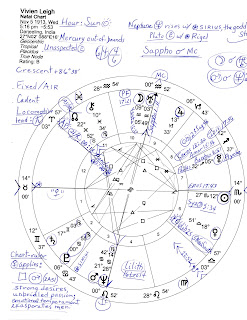 A brief bio and her natal chart are available at astro.com; birth data rated B for biography/autobiography.

Leigh's Venus is strong in its own sign of Libra where she may meet partners at work (6th house) along with her intense, sexy Scorpio Sun. Mercury, planet of communication and thinking processes, is in Jupiter-ruled Sagittarius, sign of The Seeker, and in the 7th house of Partnerships and Marriage so she thought and spoke about relationships a lot. Enlarge her chart to see the asteroids clustered around Mercury, and goddess Isis conjunct intimate Amor and nurturing goddess Ceres in the 8th house of Sex. Now another thing about her Venus, goddess of love and beauty, is that Venus is chart-ruler (via Taurus Rising) and makes only one applying aspect to other planets: a square to Mars, planet of desire, which for Vivien is placed in Moon-ruled Cancer (touchy feelings, easy to anger!) if the birth data's 'B' rating is accurate.

A Venus-Mars square denotes strong desires, unbridled passion, and an emotional temperament that exasperates men (Pelletier). Plus, her Mars conjoins glamorous Neptune, planet of the Silver Screen, an 'actor's planet' (as is Jupiter) which in this case, can be said to represent Laurence Olivier on the level of desire and magnetic attraction. In addition, a conjunction of Mars-Neptune is glamorous all by itself!

Yet the creatively inspired Mars-Neptune conjunction indicates that Vivian tended to ignore reality and the feelings of others (like Scarlett?) when asserting herself, and she was prone to disappointments (Neptune) in romance (Mars). However, the magnetic conjunction didn't disappoint her in 1938 when she won a Best Actress Oscar for Gone With the Wind! Perhaps her proud Sun Scorpio-Moon Aquarius personality blend aided her with its deep need to achieve and its magnetic effect on others--she appeared in almost every scene of the film and few if any in a worldwide audience could take their eyes off her.

Now let's complete this astro-portrait of Vivien Leigh with some odds and ends chart factors: her North Node of the Moon, a Jupiterian point of public contact, is in creative Pisces in the 11th house of Groups, Associations, Hopes and Wishes. Also in 11th house is wounded Chiron in compassionate Pisces denoting her reliance on mentors and/or gurus, plus, a wound that is spiritual. Thespian Jupiter is in the 9th house of Foreign Lands and Travel showing that much of her money and income (Jupiter) came from abroad (America, for one) and that this intelligent lady was something of a philosopher and a student of life.

Her Uranus-Neptune opposition is generational and though out-of-sign (Cancer/Aquarius) denotes that her year of birth (1913) was a period when large scale conflicts were heating up politically as leaders prepared to wage a tragic war (WWI) and the masses were too self-indulgent, apathetic, and/or busy to notice.

Vivien's Pre-Natal Solar Eclipse Saros Series ('PE', in her 6th house), the 5 New South, manifested @6Libra and has themes of peak experiences such as falling in love (in Libra, sign of relationships!), good news, joy, and long lasting benefits (Predictive Astrology, B. Brady). 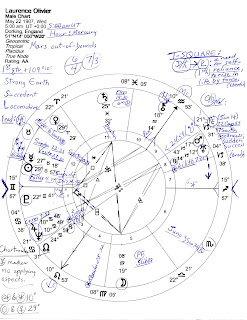 For biographical notes on the life of Olivier and another look at his natal chart (RR: AA) visit astro.com.