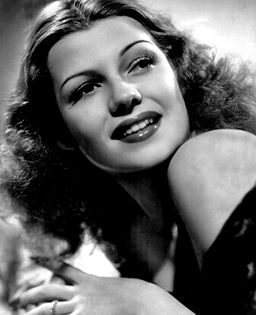 Before our Astro-Tribute, here's a documentary on the life and career of Rita Hayworth, "Love Goddess of the 1940s":

Although her birth time isn't certain, we can still get to know Rita (nee Margarita Carmen Cansino) by checking out her horoscope and planets. Astrologer Isaac Starkman has rectified her birth hour which places her creative Pisces Moon @14Pisces rather than 26Pisces (Moon or Sun in Pisces which rules the feet = a good dancer!) Natal Sun is in the 22-24 degree range of Venus-ruled Libra and spotlights two bright stars, Spica and Arcturus indicating success and popularity. In the Starkman chart, glamorous Neptune rises in 1st house of Self, a thespian signature, but in the Rodden version (7:22 pm), Neptune is placed in the 4th house of Roots, Foundation, and Domestic Scene. A 4th house Neptune in a natal chart often indicates some mystery surrounding the birth of a child though I do not know if this is the case with Rita Hayworth. (Your knowledgeable comment would be most welcome!)

If you wish a peek, here's a link to Hayworth's bio and two images of her natal horoscope--the Rodden version (7:22 pm) and the Starkman rectification chart set for 2:26 am. You'll also find a list of her husbands: *Orson Welles, Prince Aly Khan, and Dick Haymes, plus, what is reported to be her opinion on the lack of a correct birth time--that she 'had no idea when and did not particularly care' (via Paul Rosner).

Even her Libran Sun trines exciting Uranus! This indicates one with great personal magnetism. And with her Mars-Neptune trine, Rita's theatrical career was well supported in the cosmic realm by her charm, warmth, creativity, and romantic sensibilities though ambition was also part of her nature. However, a wide square (blockages) between Venus and powerful Pluto in Cancer denotes relationship difficulties that probably involved manipulation and control issues.

Now here are two quotes from folks who share Rita's creative, adaptable, romantic Sun Libra-Moon Pisces personality blend--the first concerns beauty, the last a sadly disillusioned note on which to close this post. But see if you think they relate on some levels to what we know of Venusian goddess, Rita Hayworth, whose difficult end with Alzheimer's disease could not be as sparkly as her Hollywood days:

"There is nothing in the world I so reverence as beauty, whether of the world, of character or in a soul." - Marie Stopes.

"None of us can help the things life has done to us...at last everything comes between you and what you'd like to be, and you have lost your true self forever." - Eugene O'Neill.

*Blog Note: Orson Welles is on my Coming Soon! List so if you're a fan, please stay tuned, subscribe, bookmark, or whatever you wish. This blog is a fun project and makes a soothing antidote to all the Politics I endure over at my flagship cyberspace Stars Over Washington so your support is very much appreciated! jc