Rise Above: The Natal Horoscope of Miss Liza Minnelli 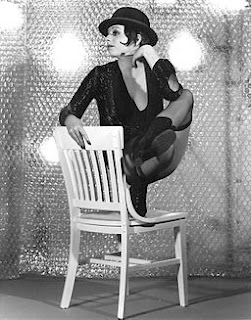 Above we see Liza Minnelli posing in character as Cabaret's Sally Bowles. And in the natal horoscope of Liza Minnelli (born March 12, 1946 7:58 am PST Los Angeles, California; Pisces Sun, Cancer Moon, ASC 1Tau18, MC 19Cap20; RR: AA for accuracy--see her chart, below) we find both the pain and triumph of an energetic performer whose life events, conditions, and abilities taught her to rise above personal troubles. And if any performer epitomizes in human form the old adage that The Show Must Go On, it's Liza Minnelli! As did her Mother but this astro-tribute of a post belongs to Liza with a Z!

Note: a very interesting video by Cliporama is available on YouTube from their Diva on Diva series: see Judy Garland on Liza Minnelli. Plus, you may wish to check out Liza's Facebook page!

Now everyone knows that Miss Minnelli's career was boosted greatly in 1972 by the release of her starring vehicle Cabaret which won a total of 8 Oscars--including one for Liza. Her talented co-star Joel Grey (nee Joel David Katz: Aries Sun, Gemini Moon, Scorpio rising) played Master of Ceremonies in the film and won a Tony for his performance while one of the Oscars went to the film's director Bob Fosse (Cancer Sun, Aries Moon, ASC 27AQ; RR: AA). The film premiered on February 13, 1972 soon after a Lunar Eclipse conjoined her natal Pluto in Leo and in a year that featured a Solar Eclipse @19Cancer conjunct Liza's natal Moon and IC conjunct starry Castor! As you know, an eclipse can cast a major spotlight into one's life by activating planets or points which may trigger changes of direction so that things may never be the same.

And yes, a strong thread of promiscuity in relationships ran through the film as well and may have made similar appearances in Liza's personal life (Uranus-MC = Venus @1Ari00 = promiscuity in the behind-the-scenes 12th house of secrets and hidden activities with Venus conjunct the publicity-producing Aries Point of Fame, Recognition, and Fortune). This Venusian midpoint picture also suggests potentials for creativity, procreation, exposed feelings, an eagerness to please, and the ability to arouse physical desire in others (Tyl).

Also note that natal asteroid-archetype Persephone, associated with transformation, sex, and/or rape by Pluto, ruler of the Underworld, conjoins Liza's natal Venus @AP. For Liza this may not be significant on a personal level but plutonian romantic themes may be found within many of the plots of her various creative ventures. Perhaps the influence of her North Node ('NN' = future direction; destiny; public contacts) @26Gem01 conjunct sexy asteroid Sappho has something to do with recurring themes of sex and romance in her career choices for which she received public notice (NN). Actually, the photo of Liza as Sally Bowles, above, attests to a sapphic influence in the film. 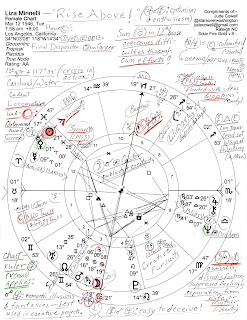 Basic chart details include: born during a Solar Hour, final dispositor Moon in its own sign of Cancer (everything leads back to her publicity-seeking, attention-grabbing Moon with its reigning need to be nurtured), and chart-ruler Venus applies only once to an opposition with Neptune which denotes romantic illusions and fantasies (listed lower left) which can best be utilized through creative endeavors. Plus, Liza's Moon conjoins starry Castor, one of the Gemini Twins, which provides great creative talents--inherited (conjunct her 4th house cusp); Neptune conjoins starry Diadem which suggests a mother's quiet sacrifice and a well-deserved crown. Note that both Liza and Judy are considered Hollywood royalty, and in the 5th house of Creativity, Liza's Part of Fortune in romantic, creative, entertaining Leo conjoins royal star Regulus which contains a caution: success if revenge is avoided. Has revenge been avoided? I don't know. What do you think?

Difficult relational issues are shown by Liza's Moon-Mars-Saturn trio in emotional, subjective Cancer, sign of Mom and the family, conjoining her IC (4th house cusp = Domestic Scene; Roots; Endings) suggesting quarrels and separations--from the mother (Moon is out-of-bounds yet their relationship was close--but perhaps on the smothering side). Separation from her father and/or from a male figure is also suggested (Mars is also out-of-bounds--'OOBs'--distant as is Pluto; Saturn the father is retrograde hinting that he wasn't always available when she needed him or was weak in some way so Liza had to become her own authority).

And so she would have carried these emotional wounds of her childhood into adulthood (as we all do!) and perhaps their themes have repeated in various forms throughout her life with different characters participating. Yet this planetary trio which includes the duos of harsh Mars-Saturn and emotionally deprived Saturn-Moon also indicates great ambition and strong motivation, plus, her Pisces Sun acts as the engine leading a Locomotive shape of planets suggesting a high-powered executive with a determined, even ruthless, drive toward success--creative success with Sun in the creative sign of Pisces which is co-ruled by imaginative, glamorous Neptune Rx in Venus-ruled Libra in the 6th house of Work (idealism in relationships). Also in 6th house is her Jupiter-Chiron conjunction of great enthusiasm and optimism. This conjunction inspires its owner toward the buoyant certainty that "the best is yet to come!" (Pottenger), and if memory serves, I believe Mother and Daughter sang that very song in a duet on TV's The Judy Garland Show the evening of July 16, 1963--Liza at age 17. Actually, I remember watching the show with my mother each week and their collaboration that evening was a stand-out.

Now for more Liza info you may wish to check out Marie Claire's feature 6 Best Liza Minnelli Quotes of All Time for it perfectly reveals in her own words the inspirational, optimistic, can-do nature of the lady, daughter of the fabled Judy Garland and her first husband director Vincente Minnelli. Obviously, the turbulent divorce of her parents when Liza was 5 years old created an emotional scar (Mars-Saturn-Moon, as noted) which she had to rise above along with other slings and arrows throughout her life yet we think of Liza as supremely gifted and highly successful. Perhaps the veils and masks of Neptune disguised the difficulties for the most part--even from herself--while allowing Liza's talent and creativity to brightly shine through from our TV and Silver Screens!