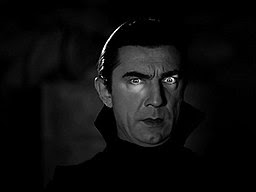 Boo! Yes, that's Bela Lugosi as Dracula staring menacingly at you! And with the spooky season soon upon us, I've decided to post the natal horrorscope and add a few astro-notes concerning the pioneering celluloid Prince of Darkness of the 1930s and 1940s, film legend Bela Lugosi. His life story makes for an eery and tragic tale in spite of major Hollywood success for in 1935 Lugosi succumbed to some bad habits and became ensnared in heavy drug use which went on to control much of his life and damage his health. Yet he married five wives, and to me it seems rather a marvel that he could manage to walk down the aisle as many as five times!

Born on October 20, 1882 at 3:30 pm LMT in Lugos, Romania (RR: A), Lugosi's birth name is quite impressive: Bela Ferenc Dezsco Blasko. He was a Lugosi from Lugos! On that day, hour, and at that particular location, the Sun clocked in @27Lib06, the Moon @4AQ37, and Mercury @2Sco49 Rx--and recently on October 4, 2019 (although he's unaware of it) Bela Lugosi had a Mercury Return! And of course, Scorpio is the most appropriate sign for the spooky season of the year and is ruled by Mars (planet of needles), co-ruled by intense Pluto, a pair of planetary energies often associated with drugs and drug use as is urge-to-merge Neptune, Venus (planet of veins and pleasure), and overindulgent Jupiter who, when acting negatively, only makes things worse.

Therefore, his natal Ascendant (Self; Physical Body) in early Pisces, ruled by Jupiter, co-ruled by Neptune, makes sense for besides drugs, toxins, liquids, and secrets. Pisces is associated with inspired creativity and The Arts. Yet as you know, the sign's traditional symbol is the Two Fishes, one swimming up toward the heights, the other swimming down to the depths. Innovative film making and success: the heights, drugs and their soul-destroying use: the depths, and Lugosi's life encompassed them both.

As for his double Air Sun Libra-Moon Aquarius personality blend, Bela was a 'detached humanitarian' who was reasonable, idealistic, and well-meaning but maddeningly elusive when it came to being pinned down (pardon, but one can't help but think of a silver stake for this!) - no pigeonholes for Mr. Lugosi! A visionary, he tended to set himself up for disappointment as most visionaries tend to do, and his attraction to emotional intrigue spurred his sense of self-dramatization (on stage and off, one imagines). Able to be flirtatious and sincere at the same time, this blend highly values relationships and 'comes alive' (!) in social settings yet Lugosi may have been blind to his own need to depend upon others. And perhaps it was his personality blend's tendency to 'dream life away' and to 'build castles in the air' that worsened his drug dependency for a certain laziness was a potential if not an actuality, plus, such Utopian dreams usually possess a siren song quality about them, so difficult to resist.

Then with his Midheaven ('MC', the Aspiration, Goal, and Career Point) in Jupiter-ruled Sagittarius, rewards in his career came yet Lugosi is reported to have spent all his money on drugs, and died penniless on August 16, 1956 in Los Angeles, California after entering a drug rehab facility on April 21, 1955--but sadly he had not stuck with the program.

And so, as another Halloween draws near, I wish all ghouls and readers a safe and joyful evening full of sweets but no tricks at all. And with this astro-tribute I wish for Bela Lugosi another night to R.I.P.