The filmography of Orson Welles includes what some people consider the best film ever made, Carol Reed's The Third Man. And of course you're familiar with his realistic Mercury Theater radio broadcast the evening of October 30, 1938 of H.G. Wells' War of the Worlds which turned out to be an exercise in terrorizing the gullible. Well, it was the night of Halloween! (Some sources give 'October 30' but I'm not certain why).

Anyway, here's a video excerpt of Orson Welles 'apologizing' for the confusion and fear caused by a fake Martian invasion of planet Earth which was too well performed and brought Mr. Welles instant fame:

As you see, the above clip contains a watermark which is not on the copies you'll find at Public Domain Footage, plus, for access to more classic videos why not 'Like' them on Facebook and perhaps we'll cross paths there!

Now here's a link to a 21-minute Mysteries and Scandals documentary featuring Orson Welles in which you may find interesting information. And of course you know that both mysteries and scandals fall within the realms of Neptune!

Check out Welles' natal chart and brief bio at astro.com, plus, more info is available on his Wikipedia page.

And if you're curious about the brief marriage of Orson Welles and 'love goddess' Rita Hayworth, here's a site featuring the synastry between their planets. They "didn't match" but they did have a daughter together. Welles had a child with each of his three wives: Virginia Nicolson, Rita, and Paola Mori. Actress Delores Del Rio was one of his amours during his first marriage which lasted from 1934 to 1940; Oja Kodar was with him from 1938 to his last year, 1985 (October 10, Hollywood, found sitting at his typewriter.)

But wait! We can't very well move on to our Astro-Portrait of the great Orson Welles without mention of Citizen Kane, now can we?

Curiously enough, just the other day (Feb 4, 2016) an article by Nina Metz concerning the classic film appeared in the Chicago Tribune. Ms. Metz relates that didn't see Citizen Kane until she became a film critic and a synopsis of the plot is included in the article. The classic film will be shown at the Pickwick Theater on February 11, 2016 and if I were in the vicinity of Chicago it would be a treat to see Orson Welles performing once again on the Silver Screen! You'll also see in the article a photo with the caption: 'Is Donald Trump Charles Foster Kane in disguise?' to which I can think of no apt reply unless Kane's overbearing nature accounts for their resemblance to one other.

Astounding to think now that Orson Welles was only 26 years old when Citizen Kane debuted. He was nominated for a Best Actor Academy Award and received an Oscar for Best Writing of an Original Screenplay which was well deserved since he was a (misunderstood) genius, born with the planet of genius and eccentricity, Uranus, in its own sign of Aquarius which implies unorthodox interests such as Astrology and other metaphysical subjects, interplanetary space travel ('UFOs'), and other occult topics such as may be seen in certain mystery or supernatural films and tales. Mr. Welles was decidedly a Uranian (cue the theramin!) and his Uranus conjoined natal Moon (Moon = reigning need; emotions), North Node (public contact), and Midheaven (MC = Career and Public Status). Whew! That's a gracious helping of Aquarian vibes and he expressed them in his writing, directing, and acting endeavors.

Now as you know, popular movie critic Hedda Hopper interfered with the film's public reception and she influenced newspaper magnate William Randolph Hearst to campaign against Welles and the film (for its too deft portrayal of a man like Hearst himself) so it opened at a small NY venue, the RKO Palace Theater on May 1, 1941. Controversy followed (as it had with War of the Worlds) so the film was shelved but released later on and is now atop the Best Films List of practically everyone, movie critics included. And Mr. Hearst, of course, is long gone though if the birth data I have for him is accurate, his Ascendant @23Taurus (his nibs himself) was rewarded by transiting Jupiter the Beneficent and quirky planet of novelty and genius Uranus on the very night that Citizen Kane debuted! (Jupiter and Uranus as a pair = a lucky break or a fortunate turn, and that it was.)

And it's quite amusing that if we look to the natal planets of Hedda Hopper (nee, Elda Furry!!) we find that both Hedda and Orson shared Sun and Mercury in stubborn, bullish, sensual Taurus--as did publisher William Randolph Hearst! Three creative Suns and Mercurys? This trio ruled by comfort loving Venus signifies three bulls locking horns or three business minded Ferdinands joining their artistic forces to thrill the masses!

A Brief Astro-Peek at Orson Welles, the Uranian Extraordinaire! 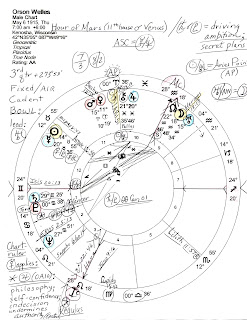 May 6, 1915 7:00 am Kenosha, WI; Hour of Mars; ASC 24Gem20 which makes communicating messenger Mercury his chart-ruler; Mercury @20Tau36 is 5 degrees 41 minutes from the Sun @14Tau55 (conjunct asteroid Amor!) denoting him as intelligent yet subjective and ego-centric in a (stubborn, creative) Taurus-the-Bull sort of way. Easy going until ruffled we might say, and his close resonance with Spain is well known.

Rising in his 1st house of Physical Body is a dissociate Saturn-Pluto conjunction (Gemini and Cancer). Karmic Saturn is critical and anxious at 29Gem25 while powerful Pluto--also a karmic planet--rises at one of the four Cardinal 'Aries Points' of World Manifestation and Fame--here @00Can38 (the Gate of Birth) though the 29th-degree Saturn melded with Pluto may signify physical problems during delivery for mother and child. Asteroid Toro, one of the power asteroids, conjoins Pluto doubling the power signature, and suggests the world war that was then on the horizon, but for Orson, Saturn-Pluto in 1st house is a planetary imprint of The Magician (supporting his Moon-Hermes-Uranus-in-Aquarius trio) and of scientific interests. A sesquisquare (135 degr) from Uranus to Saturn-Pluto was disruptive and may have caused some of his on-set filming and never-ending editing issues, plus, as you know, Mars in Aries begins new projects with contagious enthusiasm but isn't as great at completing them.

His chart shows that Orson Welles was destined for stardom with the North Node (NN) of public contact conjoining his Midheaven (Mc = Aspirations/The Goal/Career) with natal Moon also linked to The Public, Publicity, PR, and popularity. Aquarius is, of course, the sign of Otherworldliness, Science, futurism, and spacey things such as UFOs. Obviously, his Mercury Theater radio broadcast of a bogus Martian invasion is keyed here--and there is quirky, inventive genius Uranus electrifying in its own sign of Aquarius @15AQ34; Moon @18AQ48 conjoins asteroid Hermes, a trickster element and magician, which Welles certainly was on film and in his writing and his work is now aided by the long lasting effects of the transformative Saturn-Pluto duo.

His Venus-Mars conjunction in lusty Aries shows more than romanticism and passion in love, it shows creative power, emotional warmth, and generosity toward others, plus, work that involves the public. Mars in its own sign of Aries provides uncontainable energy and Venus there impassions and increases competitiveness when seeking romance, plus, there's asteroid Bacchus supplying champagne and delirium for the evening. However, a Mercury-Neptune midpoint rises at ASC bringing a streak of deception and illusion into the picture, best used in his creative career, of course, yet the pair potentially created problems in close relationships especially when exploitation was added via Mercury-Neptune.

Now if you check the chart, lower left, you see that chart-ruler Mercury makes only one applying aspect in the chart--a very close sextile (60 degrees) to Jupiter which adds philosophical interests and much self-confidence to the personality yet also denotes a tendency toward indecision which can undermine authority.

As for Silver Screen Neptune in the 2nd house of Values and Earning Ability, finding resources for creative projects continued to be necessary throughout the life of Orson Welles for Neptune here tends toward unstable finances that can flood or 'dry up' but with a magical ability to grab funds out of thin air (another magician indicator!) as needed. The Neptune in Cancer generation was hypersensitive and impressionable to outer influences, another hint at topics such as UFOs. In Moon-ruled Cancer, Welles' Neptune found its deepest expression on film and the love arrows of piercing EROS conjoins dreamy Neptune while asteroid Lilith, the seductress in the 5th house of Romance, languishes in sexy Scorpio an dis linked to Orson's natal Sun personality, ego, and life purpose.

Finally, his 10th house of Career and Public Status has generous, beneficial Jupiter the thespian in compassionate Pisces conjoining priestly Chiron (the Wound, the Wounded Healer, the Blind Spot) indicating a man of ebullience and unflagging optimism on his life quest that includes the acting profession. To me, Orson Welles has always seemed primarily to constellate two planetary archetypes: Jupiter and Uranus. When their energies blend, life experiences usually include lucky breaks, fortunate alliances, new discoveries, original inventions, travel, exploration, and bliss. At least, these are things I could wish for Orson Welles during his lifetime...perhaps with a strong emphasis on bliss!

So there you have my brief astro-portrait of Orson Welles, a passionate, magical, powerful man who grew from an l'enfant terrible of Hollywood society into a super-creative if flawed genius of film and illusion expressing his arresting talents upon Neptune's Silver Screen.

Blog Note: Two paramours of Orson Welles have been astro-profiled here if you're curious about the beautiful and exotic Delores del Rio and/or his wife, 'Venusian love goddess' Rita Hayworth who may be represented at his Ic (Home; Domestic Scene) by asteroid Hera, the legal wife who keeps the accounts, or by Juno the wife in practical Virgo in the cozy 4th house where she takes care of her husband's everyday needs.