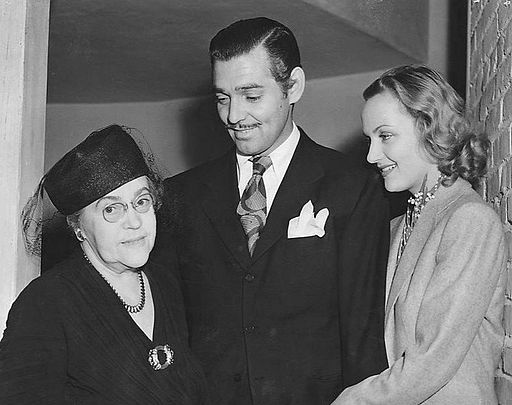 Watch as Clark romances his future wife Carole Lombard in this 4-minute clip from the 1932 thriller No Man of Her Own, their one film together. This clip has no dialogue, only very distracting music, so I recommend that you mute the sound and watch the lovebirds in action:

First I should say that astro.com mentions alternate birth times and more bio details concerning Carole Lombard (nee, Jane Alice Peters) and a brief bio on 'The King of Hollywood' Clark Gable if you're curious. Gable's birth hour is based on a published newspaper clipping showing the delivery doctor's receipt ($10) for baby Gable's entry into the world. Sadly, his mother died during his infancy but dad remarried a lady who treated the future actor kindly.

If you're looking for more details, the TV show Biography did a 45-minute documentary on the life of Clark Gable which you might find interesting. In it there's a photo of Clark before his teeth were repaired and his smile looks really rather awful. Good thing his first wife, acting coach Josephine Dillon, had his teeth "improved" as he began his acting career! Josephine was 14 years his senior, wealthy 2nd wife Mrs. Ria Langham was 17 years his senior, and here we see Gable's rising Venus in Capricorn describing his early attraction (Venus) to mature, established (Capricorn) women: 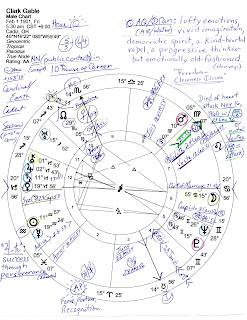 Hour of the Sun; Gibbous Moon phase (153 degr); chart-ruler Saturn strong in Capricorn denoting a formidable will and a self-centered personality; an abundance of Saturnian Capricorn energy is evident and only balanced opposite by Moon (reigning need) in her own sign of Cancer; Cancer-Capricorn = Mom and Dad; Chiron in Capricorn denotes a survivor against all odds to whom power, success, and social status are very important (Nolle); the critical degrees of 20Cancer/20Capricorn are on the Ascendant-Descendant axis emphasizing Relationships as a driving motivation in life, and a Moon-Saturn opposition hints at loss of a mother's love causing a tendency toward emotional depression.

And with Saturn-ruled Capricorn rising there is often hardship at birth and/or in early childhood--and never knowing one's birth mother is certainly that. This sense of loss is also seen in his Moon-Saturn opposition via his Cancer Moon (mother; family) in the 6th house of Health. Cancer-Capricorn (mother-father) is the security and parental axis of the horoscope and Saturn is a karmic planet with a potential for bringing loss and separation if conditions are right.

And since Saturn rules bones and teeth, dental problems are typical. However, it isn't only Venus in Capricorn, as you see. For Saturn, the old man himself, is strong in his own sign and rising just before Venus as do Jupiter @2Cap43 and Wounded Healer Chiron @1Cap53! That's a huge bunch of Saturnian vibes for anyone yet Capricorn is a musical sign and Clark showed early promise there.

Now his 1st house Sun in Aquarius (Saturn-Uranus) is in a stressful aspect (inconjunct, 150 degrees) with natal Moon and this has a health connotation. Actually, Clark Gable may have abused his own health with this Sun-Moon aspect and may have found it difficult to leave old relationships behind. Great sympathy for others is denoted and of course you know that Aquarius is the sign of the humanitarian (also, the mad scientist and more but those roles don't relate to the man unless it applies to some of his acting roles.) The Sun-Moon pair also signifies marriage (husband and wife), and you see that his Venus-Mars midpoint has been added to Midheaven (MC), a midpoint picture of a desire for marriage. Gable's passionate nature is on display for all to see at the most public point in a horoscope, the MC.

However, more loss of women from his life is shown by a Scorpio Midheaven (parental axis, 4th and 10th houses) with Scorpio ruled and co-ruled by forceful Mars and underworld Pluto. Plus, there's the fact that Gable's North Node (of the Moon) is at a critical-crisis 29th degree--of brooding, moody Scorpio. North Node (NN) relates to mother on one level, and to contacts with the public and in his 10th house of Career and Public Status, Gable certainly received lots of attention and public adoration.

Now as you see, Clark Gable was born under a difficult opposition between shocking, upsetting Uranus in mid-Sagittarius and Pluto, planet of death, the occult, and transformation. These two generational planets have a cycle of 127 years and Clark didn't live to experience their next conjunction in mid-Virgo in the mid-1960s for he died of a heart attack on the evening of November 16, 1960. Mid-Virgo falls in his 8th house so their Great Conjunction, which spurred things in the Collective such as war, anti-war protests, and Civil Rights legislation, would miss his natal Mars @10Virgo Rx by about 6 degrees. Yet an 8th house Mars is good placement for a lover of romance even though Virgo denotes that critical remarks may have been spoken at times.

As for asteroids such as seductive Lilith, look to his 7th house of Partnerships for there she is @25Leo15. (On the chart you see in green that I've noted his death occurred with transit Uranus @25Leo42 conjunct natal Lilith 24Leo15--and natal Vertex 25Leo53, a fated point of encounter that is associated with 'an appointment with death').

Now sexy Vestal Virgin Vesta graces his 7th house as well, also in romantic Leo, while his 6th house of Work and Daily Rounds contains his Moon (in her own sign of Cancer, as previously noted) and Cupido, an archetype that can act in similar fashion to Cupid with his bow and arrow of love. In other words, Gable tended to meet his ladies while at work or through work. And if you enlarge the chart, you'll see his Part of Marriage precisely atop his Descendant, the Partnership angle. Erotic Eros conjoins his South Node (SN), a point of inherited talent and of old habits we tend to fall back on--and his Eros at 29 Scorpio is in Nodal Degree (29Tau-Sco), a fated or karmic implication. This is the sort of thing that can inspire that "we were meant for each other" feeling!

For after his initial unions, Clark married for love when he wed talented actress Carole Lombard. Yet their marital bliss didn't quite make it to their 3rd wedding anniversary due to her death in a plane crash on January 16, 1942. Because of this personal tragedy, Gable joined and served in the US Air Force in order to deal with his deep grief over the loss of Carole (to which loss of mother must have been added). Actually, some say he never got over Carole's loss, and you know what? I believe them.

For one thing, his 'loss of Lilith' was a shock (Uranus) to his heart from which he never recovered--not helped by the fact that he tended to idolize the women he cared for, and as noted, found it difficult to let go of relationships, a trait made extreme by an unconscious reaction due to the loss of his mother, one assumes. Freedom-closeness issues were one result. And there's loss-bringer Neptune, very creative in versatile Gemini (an Air sign linked to flight), in 5th house of Creativity, Children, and Romantic Partners (along with karmic Pluto, ruler of the Underworld), so my suspicion is that Gable's outer success in Hollywood films never really made up for such extreme personal loss when he was alone with himself and no camera bulbs were flashing.

Yet finally, Clark Gable did marry again in 1955 to Kay Spreckles and it is reported that before passing away he did have a chance to listen to baby John Clark Gable's heartbeat. So for all Mr. Gable's worldly success and public acclaim, his basic life issues of loss, separation, dependency, relationship problems, mommy and health issues were significant obstacles on the life path for The King of Hollywood...just as they can be for you and me.

Blog Note: no, I embed here no clips of Clark Gable as Rhett Butler in Gone With the Wind with Vivian Leigh because certain people are very jealous of their copyright control of this classic film! jc