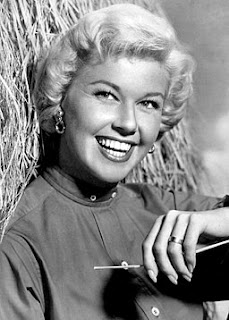 Monday May 13, 2019: sad news today for early this morning legendary Hollywood actress Doris Day passed away, age 97, at her home in Carmel Valley, California. Follow the link to read her obituary and tribute to this great lady, an animal activist before it was popular to be so.

Born Doris Mary Kappelhoff on April 3, 1922 t 4:30 pm CST in Cincinnati, Ohio, 'Miss Day' enjoyed an active film career of two decades beginning in 1948 with her first feature film Romance on the High Seas. Aptly enough, both 'romance' and 'high seas' are within the realms of astrological Neptune!

If you wish, have a peek at her natal chart rated AA (BC/BR in hand) set for 4:30 pm CST with 25Vir34 (Virgo 'The Virgin'!) rising, Midheaven ('MC') in sparkling Gemini, Sun @13Ari22, and Moon @27Gem04 (Moon conjunct MC = publicity and popularity with the pubic!). The following is a brief consideration of her Fire-Air Sun Aries-Moon Gemini personality blend, plus, here's a word about today's planets affecting her natal chart:

May 13, 2019 transits: with Neptune floating through her 6th house of Health, the undermining of her physical condition at age 97 may have been ongoing. But what stands out to me are two things: first, she had a Venus Return only yesterday (May 12, 2019) and natal Venus sits very near her 8th cusp, the house of death; also the current Mars-Jupiter Rx opposition by transit has been ruffling her Moon (27Gem04) conjunct MC (24Gem57)--Mars to natal Moon (physical body) suggests negative potentials for fever, insomnia, excessive bleeding, colitis, ulcers and/or digestive upsets. Insect bites are possible, too, but surely they were of no consequence. Meanwhile expansive Jupiter during his retrograde phase (until August 11, 2019) has been crossing her natal Mars (19Sag05 3rd house) and natal IC (24Sag57, the Point of Endings). And of course, Jupiter rules her natal 4th house, is in her natal 1st house of Self and Physical Body, and links to conditions of the gall bladder, liver, and to any condition caused by or made worse by overindulgence. For when Jupiter acts negatively the phrase, "too much of a good thing" always comes to mind.

Now as you know, a Fire-Air personality is the "live wire" of the Zodiac, full of enthusiastic ideas, joie de vivre, and a talent for persuasion. Clever and charismatic, Miss Day was a delight to watch on Neptune's Silver Screen with her Virgo Ascendant making her 'virginal roles' believable. A Fire-Air blend tends toward social activism as we've seen with her animal rights interests yet on a personal level this combo may sometimes be out of touch with their true emotions. Naturally, a career in acting may have aided her to get in touch with her emotions and we see the blend's "eternal youthfulness" displayed through her on-screen characterizations. Light and fluffy, yes, but restlessness and superficiality can be hindrances within one's personal relationships--perhaps having four husbands are part of this picture, perhaps not.

Born under the influences of Sun in Mars-ruled Aries, Moon in Mercury-ruled Gemini indicates Day's humor, wit, and creativity especially in the realms of music. In fact, imho no one has ever sung Que Sera Sera better than Doris Day!

And yes, Sun Aries-Moon Gemini is a very romantic combination of energies inspired by knights in shining armor and princesses waiting to be rescued--and perhaps describes one who is a bit on the naive side. Yet a streak of impatience and an unwillingness to learn from experience may have also been noticed in the lady by those who knew her best.

"When a man gives his opinion he's a man. When a woman gives her opinion she's a *itch." - Bette Davis.

This blend is shared natally by actors Bette Davis, Alec Guinness, Omar Sharif, and Spencer Tracey, by sportscaster Howard Cossell, and by comedian Spike Milligan. It is also the personality blend of multiple composers including the venerable Joseph Haydn. Actually, one of the 'Images for Integration' for Sun Aries-Moon Gemini is Haydn's Farewell Symphony.

And on that note, Neptune's Silver Screen must say Farewell to a sparkling, glamorous Hollywood superstar, Doris Day. May she R.I.P.