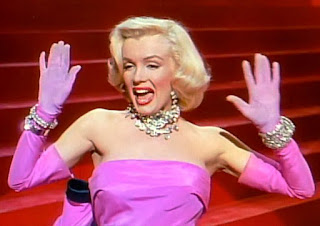 Perhaps you'll agree that the most perfect Lilith-Venus Neptunian goddess of them all is Marilyn Monroe, born Norma Jeane Mortensen on June 1, 1926 for she personaifies the glamorous Lilith archetype with her translucent looking skin on celluloid! Add the magic of Hollywood illusion to her natural beauty and you have a Silver Screen legend of extraordinary ability and a life cut short. Her close links to underworld figures and politicians increased the dangerous power she possessed if she ever vowed to spill the beans, a vow I believe she riskily made.

Yes, it is tempting to post here Marilyn's death chart though of course there are several charts to work from given the conflicting evidence and the uncertainty of her exact time of death--or the cause. Poison in the form of prescription drugs would be the method whether purposefully done or accidentally self-administered. If by another's hand perhaps it was via enema or perhaps an injection under a toenail. And though I've always intended to publish on this tragedy for Marilyn's sake, its complexity places it beyond the scope of this post which is meant as a fond tribute so you may wish to check out Killing the Legend for more details, pro and con.

However, her life ending at age 36 implicates the timing of planet Jupiter, of course, which you can see in her natal horoscope, below, @26AQ49 in the 7th house of Partnerships and Open Enemies along with her Moon, also in Aquarius, denoting fluctuating (and publicized) relationships (and perhaps a woman as an open enemy). Marilyn's final Jupiter Return (an approximately 12-year cycle) occurred on March 11, 1962 about 6 months prior to her death. Are there intimations of violence in the Return chart? Yes, and in her natal horoscope, too, but that's an avenue off our main path today.

Now as gorgeous as she is in photographs, we really must see her in action, mustn't we? So here is a brief excerpt from the 1953 hit Gentlemen Prefer Blondes starring Marilyn Monroe and Jane Russell with Marilyn's famous line, "There's a wonderful moon out tonight!"

Before we begin our astro-portrait, you may want to consult astrologer Dr. Liz Greene regarding Marilyn's Psychological Horoscope Analysis. I suspect that Miss Monroe's therapists might have benefited from reading it. And please note that the following natal chart assessment in no way references that of Dr. Greene but is only the effort of yours truly!

Marilyn's list of goddess asteroids is...stellar (sorry!) and include two in 10th house of Career and Public Status: Lilith @29Taurus and Isis @4Gemini (notated on the chart--please enlarge for viewing). Actually, gold-lover MIDAS is even there as well and even closer to her Midheaven (MC), the Goal Point of all charts. This hints at her famous song, 'Diamonds Are a Girl's Best Friend' as in the photo, above!

Also near MC on the 9th house side (Foreign Lands) is beautiful Venus herself in Mars-ruled Aries--yet there is interference from wounded Chiron @00Taurus, which some believe is a degree of violence (00-1 Taurus) but let's not go into that at the moment (perhaps in another post or an e-book if my ducks can be aligned). Still, a Venus-Chiron conjunction indicates one who sacrifices herself on the altar of love and we can probably agree that she did just that repeatedly and with her subsequent disappointment made very public (MC).

But perhaps a most telling asteroid for Marilyn Monroe is Demeter, a fertility goddess which is penned directly on her MC and in fertile Taurus, Earth sign of growth and development. And with her Ceres in 1st house (Physical Body), we see Marilyn's focus on devoted mothering which she didn't have a chance to fulfill (or perhaps the abortion gossip was tragically true, plus, rumors of miscarriages). It was demonstrably very difficult for her though I suppose lifestyle choices may have interfered with successful pregnancies by which I mean drug use, including alcohol, and the possibility that she suffered from epilepsy which can be a potential of one of her natal midpoint pictures: Uranus-Neptune = Sun.

(An epileptic condition, if present, could in part explain her always-late behavior on film sets, in my opinion. However, a deep sense of inferiority and her chronic depression were enough to block creative efforts. Years ago--sorry I don't remember the source--I read that she had been taking a drug usually prescribed for epilepsy and it was suggested that it was to aid her debilitating insomnia, if memory serves.)

Now natal Sun @10Gemini rules the chart and makes no major applying aspects to other planets which emphasizes the Sun's sign (Gemini) and house (10th). If you notice on the chart, the shape of it is a Splay pattern, an indicator of one who is very individualistic with many talents and gifts, and this supports her Sun which is basically unaspected but for a minor semi-square to her Scorpio Saturn in 4th house and retrograde (Rx). A semi-square (45 degrees) is also a health indicator due to low-grade stress--here between her vitality (Sun) and calcium-ruling Saturn.

Plus, Saturn Rx denotes difficult father issues such as a dad who isn't there.

Yet it is Mercury, planet of thinking processes, communications, and the senses, that is the Final Dispositor of the chart and all the planets. Dualistic Gemini, as we saw with actress Gene Tierney, is a brilliant and versatile communicator, actor, and much else, even a magician. Yet its burden can be the Dark and Light Twins, double stars Castor and Pollux.

Both stars lend creativity to the nature but also can trigger an inner fear that one might at some point in life "go crazy". This fear, associated with the dualism of Gemini, can play tricks upon the mind especially when a mental or an emotional incapacity of any sort lies within the family such as with Norma Jean's mother who had to be institutionalized. Mother-child issues of loss and separation are often present as with both Marilyn and Gene Tierney, and psychiatric treatment is often needed and sought. This can bring prescription drugs into the life yet again, such a topic is beyond the scope of this tribute (as are the Kennedy brothers, or her other paramours).

As you see on the chart, lower right, I've written notes concerning her T-Square pattern formed by a difficult Moon-Neptune opposition (creative yet irrational like mom; deep need for the 'ideal' relationship; self-delusion) pointing toward her 4th house Saturn Rx (dad; sense of authenticity and authority). There are enough issues within the Moon-Neptune-Saturn trio to keep several therapists busy for years and years and it's overlaid with a Water (emotional-intuitional) Grand Trine if we count the North Node (public contact/publicity, but also related to mother--North Node of the Moon). A Water Grand Trine is a very creative pattern which emphasizes the protective quality of all trines (120 degrees) which are usually considered beneficial (though they can also 'grease the skids').

But for Marilyn, this trine includes the harsh combination of Mars and Saturn so let's say that things could have been more beneficial here than Mars-Saturn with its destructive energy and destroyed vitality implications (Ebertin). After all, Saturn is the earthly father and Mars represents males--one birth father never there for her and probably too many males in her life that wanted to objectify and use her! Plus, Mars in murky Pisces hints at unreliable and/or deceptive males especially with eccentric Uranus nearby--and both planets in the sexy 8th house. Secretive behavior is promised here along with parties (orgies?) and the negative escapism that Pisces is often attracted to. And that goes for Marilyn herself for the sign of Uranus describes how one behaves. Some form of theft may also be indicated by Uranus in Pisces along with the quality of genius. And as you see, Uranus conjoins the Aries Point of Fame and Fortune--though please note that I've mismarked a star conjunct Uranus--Regulus, which should be penned at the end of Leo near her 1st-house Ceres. Mea culpa!

Then for Marilyn's associations with powerful men, we look to her Pluto-North Node conjunction while appreciating her powerful (Pluto) effect on the public (NN). Pluto-NN is also known as the 'tiger by the tail' duo and their conjunction from 13Cancer to 16Cancer+ contains two notable stars and two asteroids. First @13Cancer is Sirius, the goddess star of Egypt (aka, Isis in star lore, and The Scorcher) and Canopus, often found in the charts of film stars who go on voyages. Canopus is also the plumb line with end-of-life connotations.

The two asteroids are Moon goddess Diana conjoined with the North Node of destiny, and Hopi (conjunct saboteur Pluto), with keywords: prejudice and ambush. This grouping relates to Marilyn's tragic and untimely death on August 5 (or 4), 1962 but alas, such an assessment shall remain beyond the scope of our astro-portrait and fond tribute to Miss Marilyn Monroe!