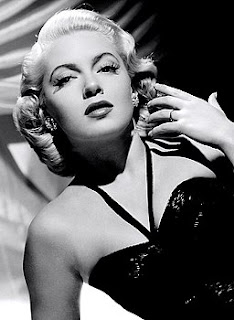 The natal horoscope of Lana Turner is available for viewing if you wish where you'll find her asteroid-archetype of glamour, Lilith, at 23 Capricorn. During her younger years in Hollywood, Lilith may possibly have acted as a beneficial Thales Point of relief for her difficult Mars-Saturn opposition because natal Lilith sextiles (60 degrees) her Mars in Pisces and trines (120 degrees) her Saturn in Virgo with sextiles and trines being beneficial aspects in most instances. Of course, Virgo-Pisces polarity is the 'victim-savior' axis of the Zodiac, and if you know a bit about Turner's life, you may agree that this polarity relates closely for the 'victim' archetype is typically considered one of the indicators of difficulties, exploitation, even violence, in relationships though we must search for other chart factors of such themes in order to verify them (Carter's Rule of Three is traditional). Still, we have her publicized life events to go by and the victimization is there for all to see.

This very much includes the tragic fact that when Lana was nine years old, her father was murdered. Later her daughter Cheryl went on trial for the murder of Turner's gigolo boyfriend, Johnny Stompanato, a notorious Hollywood underworld figure (I was only a whippersnapper at the time but I remember the scandalous trial being much covered in the news). Yet through the years Lana Turner married several husbands, one of which was not what he should have been to his stepdaughter, Cheryl, if you know what I mean, and for that sorry behavior, Lana divorced him. This can be described in part by her Mars (males; desire) opposing Saturn (loss; restriction; authority; accountability), plus, this opposition tends a person toward bad timing with a heaping helping of bad judgment, too.

Yes, keeping very bad underworld company meant emotional shocks aplenty for the beautiful actress especially with the triple conjunction between her late Aquarius Moon (emotions; family; childhood; emotional needs, detachment, perhaps issues of isolation), Mercury (thought processes; communication; planet of young people and possible deception), and Uranus, quirky planet of disruption, separation, and rebellion. Sudden news may have been quite a frequent occurrence in her life either positively or negatively and exciting activities were abundant but may have caused over-stimulation to her nerves at times. Plus, with Mutable, fluctuating Gemini rising on the Ascendant (28:19), changeable Mercury rules her chart--rather nervously. And yet her planetary trio of Moon-Mercury-Uranus may denote psychic talent if the out-of-this-world energies of quirky Uranus were harnessed--but that's not an easy thing for mortals to achieve.

But it seems that the erratic, unpredictable planet's shocking, disruptive qualities may have been uppermost in her life--as Uranian 'wild cards' or 'bolts from the blue' that suddenly change everything and are able to knock anyone off-balance. This sounds very much like the effect of eclipses, both solar and lunar ones, with secrets, scandals, and inconvenient facts often suddenly revealed in stark relief under their focused rays.

And speaking of eclipses, Turner's Prenatal Solar Eclipse ('PE') fell into the 13 North Saros Series which manifested on November 10, 1920 prior to her birth in brooding, intense, sexy Scorpio (@18Sco). With a PE in Mars-Pluto-ruled Scorpio, enormous karmic gains are possible if the sign's negative traits are kept under control--such as hatred, jealousy, and vengeance. I shall leave it to you, dear reader, to decide if such was the case for Lana Turner although maturity surely helped increase her self-control (one hopes!).

Now the 13 North themes that ran in the background of Turner's life, manifesting as a solar eclipse every 18.6 years, were concerned with 'large, ambitious group projects' such as theatrical productions. These group projects would require 'the breaking of an existing bond' and would be experienced as 'a separation then joint achievement' (paraphrasing Brady's Predictive Astrology). Personal relationships don't always fare well under the stress of separation and the temptations which may be involved for both partners--after all, when the cats away...

However, the exact effect from her 13 North PEs repeating all through her life would depend on where in her natal and progressed charts the eclipses occurred (which houses or departments of life) and on any aspects that a particular eclipse made to her various planets, if they aspected them at all. My belief is that, all themes asides, sometimes eclipses disrupt our lives just because they can! And because the Cosmos knows it's time for a major life change whether we consciously ask for it or not.

Well, that's my astro-portrait of 'cool beauty' Lana Turner, a femme fatale if there ever was one and a beautiful lady who perfectly captured the seductive Lilith archetype on Neptune's Silver Screen and perhaps in her personal romances as well.