Astro-Notes on Mia, Frank, and Ronan

In 1954, Mia Farrow, daughter of Hollywood actress Maureen O'Sullivan, contracted polio and as a compassionate adult has adopted numerous children, some with disabilities. Her marriages to Frank Sinatra and concert pianist Andre Previn are legendary and she stated recently in an interview that Sinatra, who passed away in 1998, was the love of her life. Checking Mia's Air-Earth personality blend of Sun Aquarius-Moon Capricorn, we find a lady with personal honor, integrity, common sense, and great problem-solving ability. A resourceful humanitarian, Ms. Farrow is a practical, broad-minded reformer--shrewd, independent, and a deeply thinking world citizen and human rights activist.

Firm of purpose, she tends to bring out the best in others which she certainly has done for her son, journalist-activist-lawyer Ronan Farrow, child prodigy, who has won multiple awards of late including the Pulitzer Prize (with collaborators) for an investigative piece concerning sexual predator Harvey Weinstein. A member of the LBGT community, Ronan's articles give 'voice to the voiceless', a megaphone to those who are seldom heard in American society. And when asked about his paternity as a son of Frank Sinatra, he said, "Listen, we're all possibly Frank Sinatra's son." Wink! Certainly Ronan's physical resemblance to 'Ole Blue Eyes' (blended with this mother's good looks and porcelain skin) is difficult to miss especially since Mia and Frank are said to have continued their relationship even after their divorce. (Actually this was reported at the time, if memory serves!)

So if you're wondering, Mia's natal Moon @11Capricorn precisely conjoins Sinatra's natal Venus, also @11Capricorn, and his Sun Sagittarius-Moon Pisces Fire-Water blend suggests that he was a visionary with deep convictions--and also a humanitarian who tended toward the moralistic side. Philosophical, Sinatra could be a sentimental romantic devoted to family yet perhaps his Sagittarian adventurousness and love of variety coupled with a lusty Mars in Leo explains at least in part his multiple amorous liasons through the years--that, and opportunities within the liberal atmosphere of a musical and Hollywood career full of lovely ladies. When famous artists go on tour--watch out! 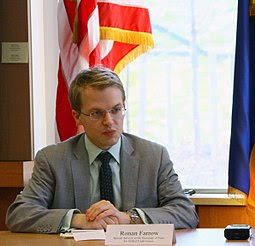 Ronan Farrow's double Fire Sun Sag-Moon Sag personality blend (with Moon--publicity and fame--conjunct his Midheaven = The World Stage, but from the 9th house side = foreign lands/diplomatic service--see his serious demeanor, above) is one of dramatic creativity seeking glory, and passionate, vivid expression but with a tendency toward periodic depression (think Mark Twain and what he called his 'black dog', or, Ludwig van Beethoven). Sun Sag-Moon Sag types are humorous, intuitive, single-minded, and lovers of freedom who prefer the wider view and the central issues in any situation. Wholehearted and sincere, this blend finds corruption, cruelty, and dishonesty unbearable and will fight against them through social work, writing, and possibly teaching (he's only 30!)

Plus, Ronan's close conjunction of Sun (essence and life goal) and thinking Mercury show great intellectual abilities in Jupiter-related realms with a potential for teaching at some point in his life. Of course, insatiable curiosity is a helpful aid to his investigative journalism efforts though he probably dislikes admitting to having any limitations, thanks to boundless Jupiter's expansive influence and love of freedom. An 8th house Mars-Pluto conjunction (with powerful Pluto as final dispositor of all his planets) in sexy, delving Scorpio hints at detective work of a journalist but also suggests an active love life that may be kept behind closed doors (plus, 12th house Venus inconjunct Uranus = secret loves). If so, I concur for it's nobody's business but his own!

As for his recent public recognition, Mr. Farrow's natal 10th house Neptune @7Cap19 has been visited and will be again by hard working Saturn (karmic planet of accountability, authority, and seniors with clout--ex: Pulitzer Prize committees). During a Saturn-to-Neptune transit his past work has been deservedly rewarded and it's a time when dreams can come to fruition although harsh reality plays a part as well. Perhaps this cosmic picture represents the scrutiny he places on previously hidden social and political conditions now brought into the light by his excellent writing ability which is aided by the respect he has garnered from many quarters.

Above photo: Ronan Farrow in 2012 by Embassy of the United States Kyiv, Ukraine (Flickr) [Public domain], via Wikimedia Commons

Here's a view with brief bio details of the natal horoscope of Ronan Farrow (1987), a page which contains links to the natal charts of Mia Farrow (1945) and Frank Sinatra (1915).