The Brew That Is True: Danny Kaye

When it comes to film, dance, and musical stars, one of my personal favorites has always been Danny Kaye (nee David Daniel Kaminsky) of Brooklyn, New York (King's County.) Born on January 18, 1911 to Ukrainian Jewish immigrant parents, 'Danny Kaye' first used the easy-to-remember name professionally in 1933 (natal Sun--essence--opposite Neptune's disguise). Was he a Saturn-ruled Capricorn masquerading as a Moon-ruled Cancer? His Uranus-Neptune opposition is generational denoting those whose process of self-discovery (Uranus) is veiled by Neptunian dreams or illusions (B. Lundstedt) such as musical theater talent can inspire.

However, a prominent marker of originality and genius, his Sun-Uranus conjunction in ambitious, hardworking Capricorn, is dynamic yet is also veiled or obscured thanks to the opposition from the magic wand of silver screen Neptune in Cancer, ruled by the Moon (publicity)! Planet of the attraction principle, Venus, is posited in humanitarian yet icy Aquarius while the planet of desire, Mars, is in adventurous Sagittarius. This is a lusty Mars in the 8th house of Sexual Union yet frustration in romance is apparent as well (Moon square Mars; Venus square Jupiter.) Some sources such as biographies hint at homosexual leanings if not activities but that is beyond the scope of this article though I will add that Danny Kaye has been quoted as saying that he had had opportunities but never acted on them--a confession or a ruse? Well, Astrology cannot be definitive on such questions as sexual preference but tendencies may be shown--inconclusively.

So if you wish, view Mr. Kaminsky's natal horoscope at astro.com where you'll find Danny Kaye with an Earthy Sun (Capricorn), Moon (Virgo), and Ascending sign (Taurus), a most practical combination of energies which must have aided him in making his Neptunian dreams come true. Saturn-ruled Capricorn is a musical sign after all and Mercury-ruled Virgo devotes itself to work while Venus-ruled Taurus is concerned with material assets, comforts, and luxury, among other things such as gardening and building--the sign's key phrase: I grow. Dependable yet sometimes lazy Taurus! This protective Earth Grand Trine displays his great popularity and easy-going manner and suggests that dancing, singing, and acting came easily for him though of course the complex musical numbers he performed in film and onstage required much rehearsal (dedicated worker Virgo opposing Pisces of the dancing feet). 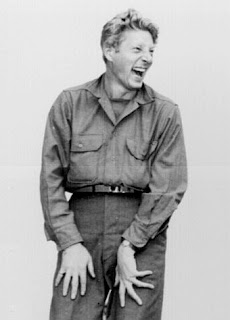 The Wikipedia bio of Danny Kaye details his beginnings, filmography, performing for the troops, famous tongue-twisters at which he excelled, his later admirable work with UNICEF (its first ambassador-at-large 1954), and the many awards and warm tributes he received in his life including the French Legion of Honor.

And yes, he has been described by those who knew him as 'a bitter man' and it wouldn't surprise me since many comedians cry when the public isn't looking. Most of us have secret sorrows in our lives and a man with Saturn in Aries (ruled by Mars) in the 12th house of Secret Sorrows, Self-Undoing, and Karma can be forgiven for being human on that score. One thing though is that his natal Saturn, signifying his earthly father, is not Rx so we must assume that Dad was a decent and available father though perhaps stubborn and self-willed (Aries).

The deeper problems come in through loss of his mother in his early teens and we see his natal Neptune-Pluto midpoint @8Cancer (sign of mother, family, nurturance, emotional security) conjoined with the difficult midpoint of Moon-Saturn @8Cancer---literally loss (Saturn) of mother (Moon.) This represents a period of grievous loss and mourning for him while still in his formative years and certainly keys subsequent tales of emotional coldness and detachment with Venus in Aquarius supporting an aloof manner unable to adequately express private emotions. Moon-Saturn also relates to ambition (especially with a Cappy Moon--mom was ambitious, too), strategy, and direction which paid off with prominence in films in America and Britain in particular.

It seems that career success and applause had to stand in for the loss of a mother's love--not an usual substitute for those who reach the heights of fame and quite often what drives them toward the hard work it takes to achieve success.

Sadly, though there are a few possible indications of drug dependency (including alcohol) in his natal chart. Exs: Mars in the Scorpionic 8th house with Mars ruled by Jupiter which rules the liver (hep C); Neptune-Pluto = Moon-Saturn (were seances held for mom? did alcohol numb the sadness?); Jupiter in brooding, moody Scorpio, a Water sign of cravings and intravenous drugs; Neptune in Cancer, another Water sign = melancholy and instability. Danny Kaye is said to have contracted hepatitis C from a blood transfusion in 1983 (and subsequently died of heart failure in Los Angeles, age 76, on March 3, 1987. I have many notes on this but let's stick with his natal horoscope for now.

For in that chart we may view his difficult fate in the form of a Thor's Hammer pattern (aka, a Fist of God) between three planets that can, if conditions are right, act as a toxic trio: Venus, Jupiter, and Pluto with poisonous Pluto as apex of the Venus-Jupiter square. As a midpoint picture they represent an ability to gain much favor with the masses but also hint at a dark underbelly such as Danny Kaye's true personality is said by some to have shown.

Actually, a Venus-Jupiter square can camouflage bad feelings that should stay hidden with superficial social niceties. The square can also denote losses via overindulgence, legal entanglements, and/or secret affairs, plus, deceptive Neptune @19Cancer is near starry Castor, a writer's star of great creativity, but this also suggests Neptune's mask veiling the dark-light twin archetypes of Castor and Pollux--kind of a Jekyll-and-Hyde condition which can make someone seem to alternate between two opposite personalities (angel vs demon.) Well, planet of The Arts, Venus, does rule his chart (via Taurus rising) and makes one major applying aspect--the square to Jupiter (1A44.)

Even so, he sounds like a typical human being to me although with a genius Sun-Uranus conjunction indicating quirkiness, a restless nature easily bored, and a disruptive temperament--and then there's that silver screen Neptune masking his true solar self ruled by restrictive Saturn via authoritative Capricorn. What can we make of him with sexy Sappho rising on his Ascendant? He could sometimes be surprisingly shy, another Saturnian trait.

Well, perhaps a few words about his Juno (the wife) in Libra in the 6th house of Work and Service. This strongly describes his working partnership with his wife Sylvia Fine (songwriter and his pianist) and the fact that Juno is in Libra, sign of Partnerships and Cooperation, denotes a more pleasant condition than some sources have reported about their relationship. However, Juno in Libra shows that mental rapport in marriage was easier to obtain than harmony on the physical level so the placement is inconclusive on that score given the gossip about them that circulated for years. In 6th house we're looking at a performer who is married to his job, just as some have said! (Asteroids in the Birth Chart, Emma Belle Donath.) And we should note that nearby @18Lib59 is asteroid Hera, the legal wife who keeps track of the accounts--also in the 6th house of Work and Service. So was he 'hen-pecked' by his wife? What do you think?

Considering his shows for our troops abroad (Mercury in 9th house of Foreign Travel), there is an obssessive-compulsive Mercury-Pluto quindecile (165 degrees) indicating a potential for handling secrets (spy missions?) and a manipulative way with communications though this manipulation may be shown on one level by his famous tongue-twisters. However, such control may also be shown by his and his wife's will in which their daughter (one child) was restricted from speaking or writing about them lest she spill their family secrets. (The Quindecile, R. Reeves.)

Well, let's close for now though I have more intriguing astro-notes concerning Danny Kaye including progressions and transits. And I shall wish Happy Kudos to you, dear reader, if you've managed to make it thus far!

And with this tribute I wish to send out a sincere R.I.P to a consummate performer who continues to give audiences much joy and laughter while setting a high bar for today's performers to strive for!

Below is a clip and a video link to The Court Jester's famous Poison Pellet sequence containing The Vessel with the Pestle and The Brew That Is True:

Please be sure to visit the official Danny Kaye website and view a wonderful video of Danny Kaye delightfully rehearsing a song about a dance: 'Ballin' the Jack' plus other features!

Any and all shares of Neptune's Silver Screen articles are very much appreciated! jc