The Sparkling Gemini Sun and Wit of Gene Wilder 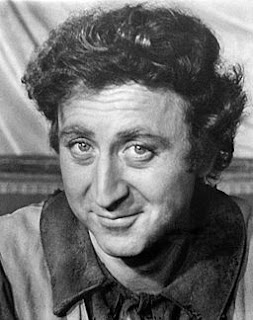 Gene Wilder 1970: photo from Start The Revolution Without Me

In spite of the fact that actor Gene Wilder never worked much in Hollywood, he's turning up today on Neptune's Silver Screen due to his status as a celluloid legend.

Here's a 44-minute Profile of Gene Wilder, a comedic genius on film who reported that he was not so funny in real life. Now don't quote me but I believe this is called, acting!

Actually, Biography also did a piece on him which was recently updated if you care to watch. Wilder was the son of a Jewish Russian immigrant father who became successful in America as did his son with the large, expressive blue eyes!

And for the astro-minded, here's a look at his natal horoscope (nee Jerome Silberman) with Sun and Ascendant in Mercury-ruled Gemini, Moon in early Aquarius (in wide conjunction with his Saturn Rx: an 11-degree orb suggesting a depressive-oppressive childhood). When he was 8 years old his mother (Moon) had a heart attack and he got his first laughs through trying to make her laugh. And fortunately, his writer's planet Mercury @5Can28 conjoins America's natal Jupiter, the jolly planet of laughter!

Wilder's Mercury-Venus conjunction in Cancer (his Venus conjunct US natal Venus!) is a signature of one whose writing is pleasing and for whom writing is a natural talent. His witty Gemini Sun and Ascendant favor it, too, with lots of inventive ideas! Do you know that one of his most iconic films (and a personal favorite of yours truly) Young Frankenstein, was Gene Wilder's creation? Many people have always assumed that director Mel Brooks wrote the script but not so!

Born June 11, 1933 at 3:50 am CST Milwaukee, Wisconsin (RR: AA for accurate data), Gene Wilder's natal chart shows the turbulent Neptune-Jupiter-Mars line-up, aka, the Marseillaise Trio of violence, which is a planetary signature of the French Revolution along with its Hitlerian implications of World War II.

Speaking of the French Revolution and the Marseillaise Trio, check out the official trailer of Gene Wilder and Donald Sutherland in the 1970 spoof Start The Revolution Without Me if you wish! Plus, here is the official trailer for The Producers, originally titled, Spring Time for Hitler which brings to mind Gene Wilder's natal Neptune-Jupiter-Mars trio of 1933 so of course he was cast in a film that ridiculed Adolf Hitler.

Then sadly, Gene Wilder passed away on August 28, 2016 in Stamford, Connecticut, and in its entertainment and arts section, the BBC was among the thousands of publications to announce the death of Gene Wilder, age 83. Naturally astrologers will recognize that his death came just prior to his Uranus Return to natal degree (26Ari20) which occurred three times just beyond his life's reach - twice in 2017, and once on March 10, 2018. As he passed, a cosmic echo formed in memory of his writing talent for on August 28, 2016, in late Virgo (sign of Health), Mercury and Venus again conjoined their energies - but this time attended by 'laughing' Jupiter, and with transit Neptune and the South Node of the Moon (both connected to loss and grief) conjunct his natal Pisces Midheaven.