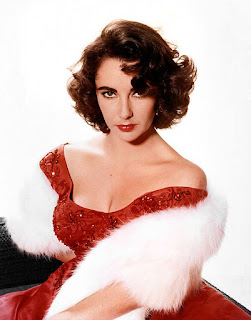 Elizabeth Taylor: a Pisces with a Sparkling Venus-Uranus and Cosmic Links to Cleopatra

Splendid, isn't she? One of my favorite Hollywood beauties from her days in National Velvet, Elizabeth Taylor's natal planets show her Sun closely conjoined with thinking and communicating Mercury, both @7Pisces, a sign of creativity, inspiration, and illusion because of Neptune's sub-rulership. One of the actor's planets, Jupiter, is the primary ruler of mystical Pisces. Rising is lucky Sagittarius, ruled by Jupiter, and the sign of horses--perfect for her early film role of an equestrian young lady. Of course, Sagittarius is also the sign of the traveler, the foreigner, and The Seeker on a Quest. 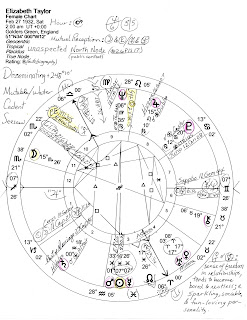 Horoscope: Elizabeth Taylor February 27, 1932 (Saturday) 2:00 am UT Golders Green, UK; data rated B for biography sourced. Hour of Mars, Mutual Reception (friendliness) between Moon and Pluto, and Mercury and Neptune; Disseminating (communicating); an unaspected North Node of public contact, with NN in Pisces, sign of The Collective; unaspected, her Nodal axis gave her extraordinary popularity with no input or interference from her planetary energies.

And though her Sun-Mercury conjunction denotes a very subjective self-centered 'idea' person who likes to have the last word and leave an impression, the conjunction in watery, soft Pisces may have softened such egoism a little along with her watery Moon (emotions) inconjunct (150 degrees) her Venus-Uranus conjunction in Mars-ruled Aries (see below). Two conjunctions at same degrees emphasizes those degrees and indicates a strong personality. Venus-Uranus reveals her sparkle and joie de vivre approach to life that gave impetus to her quickly found path to worldwide stardom--though it also indicates relationships entered into suddenly and impulsively and a tendency toward separation.

In Taylor's 10th house of Career and Public Status is a trio of asteroids of a romantic-glamorous nature and they are linked by degree to stars of success, Spica and Arcturus: seductive Lilith @21Libra, Cupid's Arrow aimed by Cupido @25Libra, and goddess Isis @2Scorpio (conjunct 11th cusp 2Sco22). Erotic Eros @4Pisces falls perfectly between her Sun and Mars, planet of desire with Mars in Pisces indicating one who may use subterfuge, secrecy, or passive-aggressive actions in relationships and be somewhat unreliable or inconstant. Sexy Sappho @12Gemini is in the 7th house of Partnerships and Taylor's Descendant (7th house cusp) @7Gem26 holds three midpoints, two of which relate to acting, pretending, playing roles (Sun-Neptune and Mercury-Neptune); the third is Jupiter-North Node (NN of the publicity-seeking Moon) denoting good fortune in contact with the public.

And speaking of Luna, the intensity of her Scorpio Moon was on display in her darker, more sultry roles such as John O'Hara's BUtterfield 8 (1960) and Tennessee Williams' Cat on a Hot Tin Roof (1958). If you're a fan, you can certainly think of other sultry examples especially with ravishing Pluto in 8th house of Sex! Pluto is at a critical degree in Cancer (the magician!) and conjoins starry Castor, a creative indicator but the star also relates to loss and death. One example you may remember is her early shock due to the tragic loss of husband Mike Todd in a plane crash.

So what better acting role is there to show her brooding Scorpio Moon's ruthless desire for revenge and all that Pisces negative escapism than 'Martha' in Edward Albee's Who's Afraid of Virginia Woolf? (1966) as she screamed at and slurred with her two-time husband Richard Burton? Academy award winner that film was!

But let's put glamour aside for a moment, for another asteroid played an important role in the life of violet-eyed Elizabeth Taylor and that's Hygeia, a health indicator, conjunct and thus expanded by a close connection to Jupiter in 8th house. Elizabeth's many medical crises and surgeries are well known and naturally her negative escapism urges only added to her health problems (by which I mean alcohol and other drugs).

And we know that Miss Taylor's life did not lack for scandals which in part may be seen via scandal-prone, secretive Neptune opposing natal Sun and Mercury across the Virgo-Pisces (victim-savior) axis of the Zodiac. Yes, Neptune added glamour, masks, and disguises to her personality (Sun) and expression (Mercury) but it also weakened her sense of identity. My suspicion is that the midpoints at Descendant reveal a tendency to role-play in real-life relationships, not just in front of a camera. And with a Sun-Neptune opposition, she may have defied authority, been doubtful of her talents at times, felt suspicious of others, and failed to gain an accurate perspective of reality during her childhood--an issue that may be laid at the feet of her parents.

Then with nebulous Neptune opposing Mercury, a definite streak of inspired creativity remains evident on the Silver Screen to this day though unrealistic dreams and paranoia may have caused personal problems for Elizabeth. She may have imagined conspiracies against her and had some amount of trouble distinguishing fact from fiction--perhaps a useful trait for an actress but not very helpful in relationships. Plus, a suggestion of secret assignations arises...

As for her primary paramour, Welsh actor Richard Burton, his natal Sun-Saturn conjunction @17Scorpio aligns with Elizabeth's natal Moon @16Scorpio. Sun-to-Moon is one of the best relationship links in Astrology, in fact, Sun-Moon is marriage and Burton's Sun conjoined her Moon. Unfortunately, karmic planet Saturn joins the happy solar-lunar couple and though Saturn provided longevity to their union (they did marry twice and never really got over each other!), old devil Saturn also brought loss and depressive emotional influences that interfered with their partnership, This can be felt via Burton's melancholy temperament (Saturn squares Neptune in his natal chart and psyche). so again we see that drinking great quantities of alcohol was precisely the wrong antidote for them both, separately and together, emotionally, psychologically, and physically.

Now penned on the chart in 10th house you see 'PE" which is the Pre-Natal Solar Eclpse Series in which she was born, the 5 New South, which manifested on October 11, 1931. 5NewS themes seem quite appropriate for the events of her life: joy, good news, benefits, and peak experiences like falling in love (Brady). Elizabeth was great at falling in love and with her Moon-Venus inconjunction, tended to cater to or pamper her partners and friends, and with her Moon inconjunct Uranus, she was excitable, impulsive, and spontaneous. Adjustments (inconjunct) may have been made, plus, inconjunctions may denote strains upon one's health.

Well, that's my brief peek at the natal planets of Hollywood legend, Elizabeth Taylor. There are other chart factors of interest if you look further into her chart and I hope you will. Meanwhile, please enjoy the following videos and look below for a few of the cosmic links between Miss Taylor's and Queen Cleopatra's natal planets:

For more movie clips, visit or subscribe to Movieclips Vault.

And here's an interesting 12-minute+ video Hollywood Fashion Machine - Elizabeth Taylor - Part 1 if you're curious or how about a wonderful tribute to Taylor including biographical info and great photos! One pic is of her in costume for her starring role in the 1963 film Cleopatra (see Amazon link, below), now in the Library of Congress.

Did you know that the natal chart of Cleopatra is available? Born January 13, 69 B.C., her chart is presented by astrologer Noel Tyl who has rectified her moment of birth via the timing of well known events in her life. This allows us to set up a natal horoscope for the last in a long line of Egyptian pharoahs. As we might expect, there are centuries between their births and yet there are cosmic links between the planets of Cleopatra (69 BC) and Elizabeth Taylor (1932):

Both natal horoscope are weighted on the side of the Water element denoting deep insight and fine intuition. Politically savvy Cleo's natal Jupiter @8Sag conjoins Taylor's natal Ascendant (a fortunate connection) and amazingly the natal Saturns of both women conjoin precisely @00Aquarius (perhaps their fathers had ambition and extravagance in common?)

Then, Cleopatra's Mars @8Libra conjoins Taylor's natal Midheaven (MC = The Goal; Career Point), and Dame Taylor's natal Jupiter @15Leo (royal Leo!) is quite near Cleo's natal MC @18Leo (with her natal Midas upon it--her goal to rule--Leo-- and amass wealth--Midas). As you know, Queen Cleopatra purposely identified herself with goddess Isis and had herself depicted on coins as such. Goddess asteroids are often mentioned here since actresses of great beauty were often depicted as goddesses and idols for the public to worship.

Plus, the planets in both charts are configured into a Seesaw pattern indicating temperaments that always acted under opposing views with sensitivity toward antagonistic potentials (M.E. Jones). A Seesaw (like a teeter totter) person exists in a world of polarities such as we find exemplified in a horoscope: 1st house opposite 7th house = Self and Other, etc. Unique achievement is possible with a Seesaw temperament particularly if a tendency to waste time and energy in unpromising situations and relationships is avoided.

How well each queenly lady managed to do this I shall leave up to you to decide!

Astro-Note: you may wish to check out Elizabeth Taylor's natal horoscope at astro.com since it uses 2:30 am as her birth time and rates the chart AA for BC/BR in hand. The chart shown above is from my Solar Fire Gold software v9, the latest version.

As usual I am way behind with my book reading list but if I ever catch up I'd like to read Cleopatra the Great: The Woman Behind the Legend by Egyptologist Joann Fletcher.

Film Note: a restored version of the 4-hour+ 1963 film Cleopatra is available on Amazon for rent or purchase. Or, simply watch the trailer. That may be gracious plenty unless stilted acting is your thing.