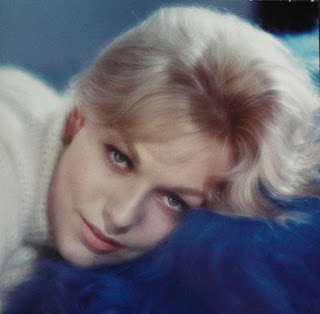 If you take a peek at the natal horoscope and brief bio of film star Kim Novak, nee Marilyn Pauline Novak on February 13, 1933 at 6:13 am CST Chicago, Illinois, you'll find a shy child who grew into a popular Aquarian beauty. Unsurprisingly, Kim won a beauty contest at age 20 and proceeded to work in the film industry until she left Hollywood in 1966 for some 'me time' at the beach.

During her career, Kim became known for such films as Alfred Hitchcock's Vertigo (1958) and The Man with the Golden Arm starring Frank Sinatra as detailed in her Wikipedia bio. If you wish, have a peek at Frank's bio and natal chart with his creative Neptune in show business Leo conjunct Midheaven, the Career Point. Frank Sinatra was born with Sun Sagittarius-Moon Pisces on December 12, 1915 at 3:00 am (Rated A, from memory) with 28 Libra rising, in Hoboken, New Jersey.

Sounds as if they had a sociable time (Libra) filming The Mirror Crack'd while making friends or reuniting with very familiar old ones! Here's a trailer for the film:

Check out this TV Guide interview Kim did in 2013 where she opens up on several topics including the scandal of her reputed affair with Sammy Davis Jr!

And Now for a Little More Astrology:

Kim Novak's personality blend of Sun (conscious mind; adulthood) and Moon (the unconscious; childhood) is a sociable double-Air affair of intelligence, grace, and thoughtfulness yet it does not provide a sense of self-importance. Self-reflection is more like! Romance and idealism may be notable along with a "gentle dignity," charm, and a preference for being only an associate of the 'in crowd' (such as Joey Bishop's and Sinatra's Rat Pack). However, there is a certain attraction to glamour and style for one born under the AQ-Libra combination of energies of detached, idealistic, friendly Aquarius blended with beauty-and-art-loving Libra, sign of cultural events such as art openings! And we can see how her 1st house Sun, Mercury, and North Node of public contact brought her notice and aided her career of shining (Sun) before the public (NN).

As for Miss Novak's glamorous and romantic asteroids, they are:

Plus, a significant pile-up of planets and asteroids rises with Kim Novak's natal Ascendant (Physical Body; the Self):

Goddess Venus (7AQ34) has just arisen followed closely by Saturn denoting that hers was perhaps a difficult birth especially since health asteroid Aesculapia rises, too. Others rising are Pallas (wisdom; the daughter) and goddess Isis--all within the 7-to-10-degree range of Aquarius and contributing to the actress's cool looks and dignified demeanor. Why, with Isis rising on her Ascendant, we might even say that Kim Novak is the goddess Isis!

And we might wonder, in the case of a cool beauty such as Aquarian Kim Novak, is it a coincidence that archetypal 'Isis' sounds very much like frozen ice?