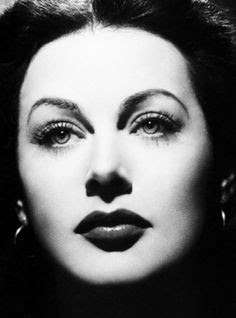 A Fond Tribute to Hedy Lamarr through the Lens of Astrology

Have you ever noticed that the actress' screen name 'Lamarr' is 'the Mars', planet of desire? And did you know that Lamarr was half of a duo who made a scientific breakthrough on what they then called frequency hopping and which is now known as spread spectrum? A book Spread Spectrum: Hedy Lamarr and the mobile phone can tell you all about it for she was much 'more than a pretty face', as they say. For after all, Scorpio is a very intelligent, deeply probing sign with often a scientific bent which benefited the war effort via her and George Antheil's invention of a 'secret communications system'. In fact, in recognition of their work in 1941, Lamarr (1914--2000) and Antheil (1900--1959) were inducted into the National Inventors Hall of Fame in 2014. Though 17 degrees apart, her thinking planet Mercury and action planet Mars are also in Scorpio, you see!

Plus, Lamarr was born under the influence of a major conjunction denoting a facility for deep concentration and hard work: Saturn conjunct Pluto, both at 1 Cancer which is within range of one of the Cardinal Points of Fame, Recognition, Prominence, and Fortune (00Cancer00). And having a 'lucky break' pair like Jupiter conjunct Uranus in Uranian Aquarius was helpful for her, too, and offered her chances for long distance travel. Actually Jupiter-Uranus is the breakthrough pair that all pioneers and inventors wish to have!

Now hers is mainly a Water-drenched chart (lots of Cancer, Scorpio, Pisces) so emotions, moods, insights, and intuition are very much emphasized. Inspired by the softening, creative rays of Lamarr's dreamy, veiling Moon-Neptune conjunction in theatrical Leo, let us turn back toward the Hollywood Hills...

Hedy Lamarr is known as the first woman to appear totally sans clothing on the Silver Screen though this is a dubious distinction according to some folk (moi among them!) so it seems that the concept of being first--of possessing a pioneering spirit--tallies well with the Mars in her name since pioneering, adventurous, even lusty Mars in Astrology is known as the me-first planet, the I AM...the impulse to be...and rules impetuous Aries (the Ram), the first sign in the Tropical Zodiac.

And as you know, her Sun-Mercury-Mars sign of Scorpio is ruled by Mars and sub-ruled by sexy, obsessed, controlling, ravishing Pluto. For Hedy Lamarr, the words sultry and mysterious come easily to mind.

Born November 9, 1914 at 7:30 pm MET in Vienna, Austria (rated A; from memory) with glamorous Lilith in sensual Taurus and Silver Screen Neptune in dramatic, entertaining, romantic Leo conjoined with 'goddess' Luna, the Moon, the natal horoscope of Hedy Lamarr shows this most beautiful Austrian-American actress to be a Moon-ruled creature with Cancer rising and Pisces at Midheaven and very much influenced by nebulous Neptune via their conjunction. As you know, astrological Neptune (the ancient undersea god in Mythology) is often described as a planet of glamour and illusion, the currency of the Hollywood film industry (and the namesake planet of this tribute blog!) The amount of Water signs in her chart indicates that tears may have been easy for her to conjure on cue, a handy talent for any actress.

Now let's go through her natal planets in their signs to gain perhaps a clearer picture of Hedy Lamarr as a person:

Sun--she was, in her essence, a Scorpio; Moon--she felt and emoted as a self-protective yet nurturing Cancer; Mercury--she thought and communicated intensely as a Scorpio; Venus--she attracted and was attracted by foreign cultures and people, and loved as an adventurous, fun-loving Sagittarian; Mars--she acted as a Scorpio; Jupiter--she related as an Aquarian (friendly?); Saturn--she controlled, organized, worked, and feared as a Cancer; Uranus--she behaved as an Aquarian (aloof? snobbish?); Neptune--she dreamed as a romantic Leo; Pluto--she obsessed as a self-protective, security-anxious Cancer. Her wound or blind spot: Chiron in Pisces which denotes her having a mentor or guru for guidance; her North Node (future direction; public contact) is in creative, compassionate yet escape-prone Pisces, sign of the Two Fish: one swimming up toward spirit and one swimming down into the depths.

Here's a trailer of Hedy Lamarr and Victor Mature starring in director Cecil B. DeMille's 1949 Biblical epic Sampson and Delilah along with a few actors' names you may recognize plus, "a cast of thousands"--and you know that Delilah is another version of the classic archetype of the seductress in the icon-goddess tradition of Lilith-Isis-Venus:

Now I ask you: is there a more perfectly titled film to appear here on Neptune's Silver Screen than Hedy Lamarr starring in The Heavenly Body? The plot of the film involves an astronomer vs astrologer theme with lovely Hedy as the glamorous Lilith in between! William Powell (Sun Leo-Moon Libra) also stars.

Well, perhaps we should end our Hedy Lamarr tribute with a mention of the ongoing enigma of how Hedy Lamarr and British actress Vivien Leigh look so much alike! Here's a photo of Vivien though her natal horoscope will be featured in a later post--probably in tandem with the natal chart of Laurence Olivier (for obvious reasons). What do you think of their resemblance? Close enough for you? 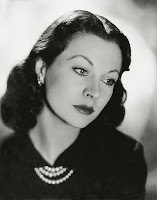