A time capsule from 1957 has arrived! It's a trailer teasing us with Billy Wilder's Love In the Afternoon starring Audrey Hepburn, Gary Cooper, and Maurice Chevalier:

Moon-Isis Rising and the Stars of Audrey Hepburn

The actress we know as Audrey Hepburn was born Edda Kathleen Van Heemstra Ruskin on May 4, 1929 at 3:00 am GDP in Ixelles, Belgium with Sun 13 Taurus, Moon 6 Pisces, and 28 Aquarius rising. After a happy childhood, her parents divorced and later World War II came along which made family life much more complicated as it did for many people. Ballet-trained Edda, as she was called, moved to London in 1948 where she was spotted while dancing by Colette who chose Hepburn for the role of 'Gigi'. For more details, you may wish to view her horoscope and bio at astro.com. Or check out my version, below, with a few of notes penned on--please enlarge for better viewing: 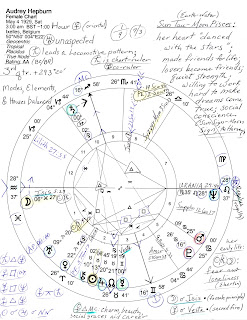 Hour: Venus, planet of love, beauty, and the arts; lunar phase: 3rd quarter, the crisis in consciousness stage; hardworking Saturn in 10th house of Career and the World Stage, strong in its own sign and house, and leader of a Locomotive pattern of determination, ability, and success. Plus, Saturn is at 00 Capricorn, one of the four Cardinal World Points of Manifestation (along with 00Aries, 00Libra, 00Cancer) which tended her toward fame, prominence, recognition, and worldly success, and is also chart-ruler along with co-ruler Uranus which makes no applying major aspects. This throws the spotlight upon Saturn's applying trine with artful Neptune which denotes Miss Hepburn as having a good sense of values and blessed with her intuitive (Neptune) and rational (Saturn) natures in balance. Her personality (Sun) conjoins Jupiter providing her with faith in her abilities (self-confidence) and a desire for recognition. Sun also sextiles (60 degrees) powerful Pluto, an aspect that denotes a mesmerizing way with words, total awareness of a strong will that can accomplish anything, and a deep interest in finding solutions for societal ills.

Now for our Neptunian purposes, we note her natal Neptune on an angle and prominent but for another reason as well--Neptune in dramatic Leo conjoins one of the Royal Stars of Persia, Regulus (success if revenge is avoided)--and, as you may read in her bio, Audrey's mother was a Baroness. An out-of-sign opposition between Moon and Neptune indicates vast creative talent and an attraction to illusion--handy on-screen but Moon-Neptune issues can cause trouble accepting reality within relationships, as we'll see.

And for her goddess-related asteroids, there's lovely Isis conjoining natal Moon in dreamy, creative Pisces as they rise together in 1st house of Physical Body. Her early attraction to dancing makes sense since having either Sun or Moon in Pisces, sign of the feet, most often describes someone who is a good and agile dancer--very 'watchable' as she proved in her films. Yes, fluid movement came easily to Miss Hepburn with her Moon in a Water sign! And of course, a Pisces Moon relates closely to her humanitarian work which is also denoted by her Pre-Natal Solar Eclipse in Saros Series, the 2 South with its themes of: great gains through changing group associations via travel, the arts, and/or love of humanity (Brady).

You see her PE at 19 Scorpio marked in 8th house; this eclipse manifested on November 12, 1928 and is linked by opposition to her natal Jupiter in Taurus. I suspect that the Jupiter connection (planet of expansion and increase) to 2 South themes enlarged her prospects for humanitarian work for she served as special ambassador for UNICEF. Natal Jupiter also conjoins her North Node of public contact which is a Jupiterian point all on its own. Plus, you know that one of Jupiter's many roles is the thespian so here we have a well-balanced lady (all her modes, elements, and houses are in balance) and we see her equanimity displayed upon the Silver Screen--and her good posture from years of dance training!

Other goddess asteroids are prominent and signal inspiration:

Angular Urania conjoins natal Descendant, Neptune, and Regulus, and 7th house Terpsichore Rx is at 16 Virgo (sign of archetypal goddesses including, The Virgin--1959's The Nun's Story?! Well, her Mercury does conjoin asteroid Vesta). Both asteroids are named after two of the Nine Greek Muses. Urania (discovered in 1854) is known as the Muse of Astronomy, Astrology (they were once studied as one, you know), Music, and Science. Did she study or use Astrology, or perhaps have someone who did this for her (7th house)? Perhaps, yet Urania also resonates with the planet of innovation and originality, Uranus, here in Audrey's first house (and unaspected which emphasizes its sign and house position and denotes originality, eccentricity, and love of independence). But Astrology buff or not, the musical link via Urania is there along with the influence of Terpsichore, the Muse of Choral Dance, Choreography, and Song. (New Insights into Astrology, Nona Gwynn Press). And as previously noted, Miss Hepburn began her career as a dancer--in choruses and cabarets.

Now with Venus in Mars-ruled Aries, she may have relished being the aggressor or initiator in relationships (in real life) yet she desired (Mars in Cancer) a passionate home life with a mate. Yet divorce marred her life and we might suspect the tension within the Venus-Mars square (see paragraph, below), plus, nebulous and often deceitful Neptune conjunct the Partnership angle, the Descendant, as part of the problem. Neptune links to acting, of course, or to those who wear masks or disguises--not a stable influence in actual partnerships but fine on celluloid. Mars in the 6th house of Work denotes relationships with males begun at or through work activities--and there also is sexy Sappho in romantic, dramatic Leo.

And with Neptune in this position, her expectations of a mate may have been too high and the subsequent let-down too disappointing to accept. And with royal Regulus affecting the house of Partnerships, was her first husband perhaps a royal or linked somehow to kings or kingmakers? Another romantic issue may have been her Venus-Mars square indicating one who becomes impatient and irritable with loved ones--perhaps exasperated might be the operative word. And in addition, asteroid Juno (the wife) conjunct natal South Node, a Saturnian point of separation, does not bode well for marriage longevity and suggests that Miss Hepburn may have repeated past behaviors (SN) that no longer benefited her--either depending on her usual behaviors or inherited ones from Mother or from more distant generations of the family (maternal and/or paternal). Yes, separation is denoted by Juno-South-Node and may possibly describe sexual issues (8th house) along with some measure of moodiness or over-sensitivity (Neptune-Ascendant = Mercury). And with eccentric Uranus in 1st house of Self, Audrey could be quite independent and subject to flashes of genius--though Uranus in 1st house also hints at relationship break-ups.

All in all, I see Audrey Hepburn's horoscope as a portrait of an independent-minded lady (Uranus in 1st house) of practicality (Sun Tau-Moon Pisces), a talented dancer and actress with a cool, elegant exterior (Moon conjunct Isis)--somewhat detached yet inside a compassionate woman (Pisces Moon) who could be duped in romantic relationships if she wasn't careful (Neptune conjunct Descendant), and who successfully achieved major success on the World Stage due to her talent, poise, charm, and beauty which may still be admired and appreciated upon Neptune's Silver Screen.

To view Love In the Afternoon in its entirety, visit the film's IMDb listing, plus, you'll find it available on Amazon and on YouTube.