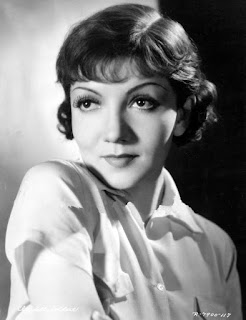 Trailer for Midnight (1939), a Cinderella-esque adventure about being stranded in Paris:

Born in Saint Mande, France (or as some sources say, Paris) on September 13, 1903 at 8:00 am LMT, Emilie Claudette Chaucoin was the daughter of a baker who moved his family to the US when little Claudette was three years old. She grew up longing to appear on Broadway and in 1923, debuted in The Wild Westcotts and adopted the stage name Claudette Colbert. Follow the bio link, below, for more details or check out this 24-minute documentary about her life and career. 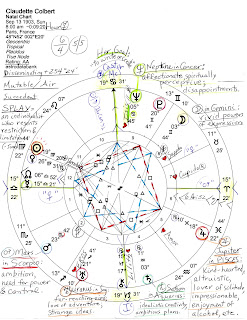 Right away we notice a Mercurial, gamine quality to Colbert's persona with both Sun and Moon in the two Zodiac signs ruled by Mercury, the planet of youth and communications. However, love goddess archetype Venus is chart-ruler since the rising sign is Venus-ruled Libra, and also rules her Mercury which is precisely rising. Born at 8:00 am on the dot makes an astrologer wonder if her birth time was rounded off rather than 100% accurate. Still, Libra rising does fit her looks and her profession so let's consider Colbert's personality blend of Sun Virgo-Moon Gemini. Then we'll check out her goddess and romance asteroids, eclipses, and her 9th house Neptune in Cancer which is her most elevated planet.

The Earth-Air combo of Sun Virgo-Moon Gemini denotes one who loves words, has refined tastes, and is quick-witted and playful. Here is both a thinker and a doer who takes play as seriously as she did work. Quickly adaptable, Ms. Colbert possessed analytical ability, logic, and a cool, detached approach to most things, and while delighting in spontaneity, she probably appeared at times to be something of a snob.

In relationships, the twice-married actress upheld romantic idealism but it's doubtful that she became as emotionally involved with people as she thought she did. Yet a settled domestic life and a creative career were conducive to her enjoyment of life and helped her put aside the tendency of discriminating Virgo to criticize. With her Gemini Moon, too many details may have overwhelmed her at times and caused worried moods and pessimism.

In the 'Hollywood Goddess of the Silver Screen' department, Claudette Colbert as a Virgo, the sign of The Goddess and Virgin, had an attractive persona on screen and seductive asteroid Lilith in the 4th house, one of the psychological houses. Of course, her goddess planet Venus was also in sexy Virgo, a placement which adds issues of morality and practicality vs romantic considerations to the picture.

Above, we mentioned her cool detachment which is supported by icy-cool Isis, goddess of them all, in Moon-ruled Cancer in her 9th house of Foreign Lands and *parallel Silver Screen planet, Neptune. As most elevated planet (although in 9th house), Neptune is most visible on the world stage (Midheaven/MC) and with powerful Pluto there as well, we see that her Mercury-North Node conjunction rising fulfilled itself in easy access to public contacts (NN), communication skills (Mercury), and powerful backers (Pluto).

Asteroid of intimacy, Amor @6Pis58, is in the 5th house of Romance and Creative Pursuits so romantic partners may have been met on film sets; Sappho, asteroid of sexual encounters and in the 8th house of Sex, is in lusty Taurus, sign of The Bull, plus, with Venus in the secluded 12th house, perhaps a few secret assignations took place! Her planet of desire, Mars, is in its own sign of sexy Scorpio, after all, no matter how prim and proper she may have seemed!

In addition, her Venus and Mars sextile (60 degrees) one another which suggests a need to be in charge (see Mars in Scorpio listed on the chart image), a good organizer, and one who can be assertive when she wants to be. This Venus-Mars aspect identifies an inner conflict of warrior vs peacemaker who is peaceful until provoked (Epstein).

There is more to say, of course, for hers is quite a complex horoscope with several planetary patterns which include an Earth Grand Cross (marked in red), several T-Squares (formed by the Grand Cross), and two Grand Trines (protection; talents; marked in blue) if we count the North Node (public contact) and her MC (Career Point) between: 1. Moon, Saturn, NN, and 2. Mars, Jupiter, MC, a guarantee of career success). Yes, Grand Trine patterns can suggest laziness (things are too easy, so why bother!) but there are massive amounts of energy and dynamism within such a major Grand Cross.

Well, that's my astro-homage to the lovely Claudette Colbert. Hopefully you've gotten something out of it and now feel you know Claudette a little better than you did before!

But if you're still curious about the lady, here is a brief bio of Colbert's life and career along with a bit of trivia (ex: why she preferred that her left side be photographed).

And if you look closely at her photo, above, you may wonder as I do: did the actress suffer from a case of strabismus?

*A parallel in Astrology is similar to a close conjunction and may be used for timing purposes. Here, Colbert's Isis and filmy Neptune are in a sense conjoined and their energies working together as with a planetary conjunction.

Also see Planet of Desire Mars Through the Signs.